In my final semester at college, I took an independent study titled "Models of Complexity" with professor David J. Vampola. Through the course of this study, and earlier for a final project for one of his classes, I developed a few programs and wrote a few papers about complex systems, focusing mainly on social interaction.

Below, I provide pictures, source code, and papers regarding this study.

This was an early look at complexity in social simulations. In this work, I added a few rules to the classic Conway's Game of Life which simulated social connections as having a sort of lifeline effect, being able to keep a cell alive if it simply had enough live friends. The resulting visualization showed what could be described as an almost metropolitan experience, with stabilized labrynthine clusters of livecells forming what looks like city blocks. 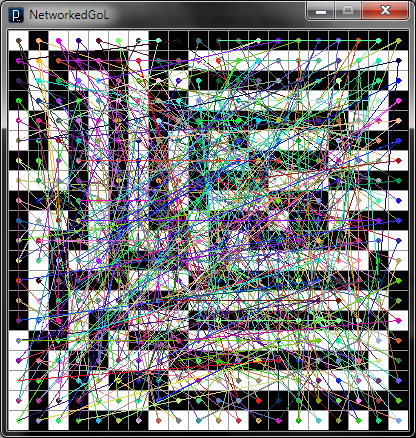 Here's a paper on the subject:

Networking Conway's Game of Life: Towards a dependency model for life and death

Eloworld is a look at social grouping (i.e., the formation of cliques) by the use of an earned social currency. A number of actors move about on a 2 dimensional plane, each with an Elo score and a ranking based onthat score. The actors seek each other out and ask each other to playa zero-sum game with the other, which is a simple dice game, weighted by the actor's intrinsic "true skill" at the game. This was a good simulation by virtue of the fact that the results were completely against my expectations. I had expected clusters to form of actors with similar scores, but instead a singular large cluster formed in the middle of the game world, with all the actors running in circles around each other.

Here's an invited presentation I gave on the subject as a part of the Cognitive Science Lecture Series at SUNY Oswego:

Here are a few papers on the subject:

A Prelude to Complexity

And here is a link to the source code on Github: